Thaye Dorje, His Holiness the 17th Gyalwa Karmapa, recently returned from a private two-week visit to the Kundrol Ling monastery in Auvergne, France.

The purpose of Karmapa’s visit was to transmit the necessary empowerments and vows to the students who are participating in the next cycle of the three-year retreat, which begins on Buddha Purnima on May 21 – the day that marks the birth, enlightenment and Parinirvana of Buddha Shakyamuni.

While the visit had initially been intended to be a strictly private one, purely for the three-year retreatants, Karmapa was invited to Paris on April 2 to participate in the 49-day memorial service for Mr. Jean-Louis Massoubre, an extraordinary man who made a vast contribution to establishing Buddhism in France. Karmapa was humbled to accept.

As word spread within the local community of Karmapa’s visit to France, once the transmissions for the retreatants were completed, Karmapa graciously decided to offer a public empowerment of Buddha Amitayus, one of the wisdom aspects of long life, for the people living around Kundrol Ling. Despite the last-minute notice, and no official announcement regarding the event, almost one thousand people attended, including members from the local community as well as students who traveled from all over Europe. 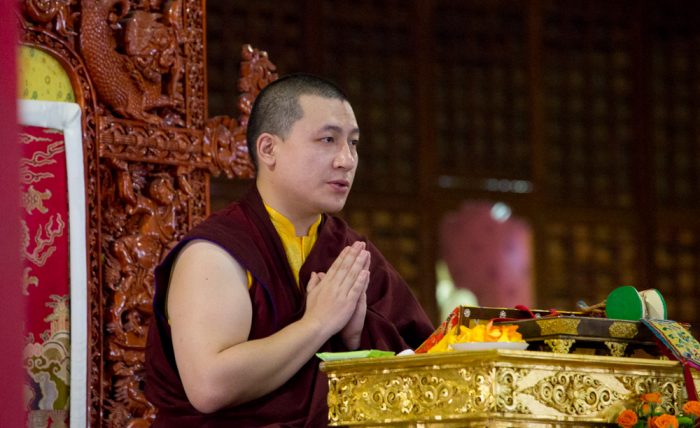