Mipham Chokyi Lodro was born in 1952 in Eastern Tibet, in the Kingdom of Derge, into the noble Athub family, as the nephew of the 16th Karmapa. His birth is said to have been accompanied with extraordinary occurrences: rainbows of exceedingly clear colours appeared and filled the sky, and flowers suddenly bloomed even though it was winter.

At the age of four, the child recognized old monks from Yangpachen monastery, the seat of the Shamarpas. At the age of six, the 16th Karmapa recognized the young Mipham Chokyi Lodro as the 14th Shamarpa and, in an informal ceremony, enthroned him at Tsurphu, the main seat of the Karmapas in Tibet.

While in Rumtek, the 16th Karmapa bestowed on the Shamarpa the complete teachings and transmissions of the Karma Kagyu school, such as the entire Kagyu Ngag Dzo collection of empowerment transmissions, the collection of Dam Ngag Dzo, the Ocean of Definitive Meaning of Mahamudra, the Gya Chen Ka Dzo, the Chag Chen Gya Shung, the Chigshe Kundröl, the empowerments of the Drub Tab Kuntu, and other vast collections of transmissions. Shamarpa also studied extensively the classical subjects of Madhyamaka, Prajnaparamita, Abhidharma, Vinaya, and Epistemology and excelled in all his studies with distinction.

Khyabje Dilgo Khyentse Rinpoche, a great master of the Nyingma tradition, had given him the entire collection of the Nyingtig cycle of empowerments, explanations and quintessential instructions. The 10th Khyabje Nyenang Pawo Rinpoche, the last main disciple of the 15th Karmapa Khakhyab Dorje, transmitted to him the entire teaching of the 2nd Shamarpa Khacho Wangpo as well as selected teachings of the 8th Karmapa Mikyo Dorje. In addition, Shamarpa received teachings from the the great master Khyabje Ugyen Rinpoche, in particular the transmission of the profound Rinchen Terdzo and the esoteric Chokling Tersar initiations.

From Kalu Rinpoche he received the entire cycle of the Shangpa Kagyu teachings and from the 70th Je Khenpo of Bhutan he received the reading transmission of the Chag Chen Gya Shung, the Mahamudra collection of different Indian Mahasiddhas. In brief, therefore, the Shamarpa had received transmissions from more than ten great Buddhist masters, and had thus become an accomplished scholar learned in both sutras and tantras.

The 16th Karmapa also transmitted to him the complete three-fold vows, the outer Vinaya vows, the inner Bodhicitta vow and the tantric vows of the Secret Knowledge Holder (vidyadhara). He formally installed him as his lineage holder on the highest position after himself.

In 1980, a year before the 16th Karmapa passed away, he made sure to give the Shamarpa the special oral instruction of the Lineage of Absolute Realization, which was transmitted to Tilopa in an unbroken lineage from Buddha Vajradhara. In addition to the transmission that Shamarpa had received from the 16th Karmapa, he had received a large number of transmissions from other great contemporary teachers of various traditions.

During the lifetime of the 16th Karmapa, the Shamarpa had travelled extensively as the Karmapa’s representative and future regent. In Nepal for example he had renovated and consecrated the Karma Raja Mahavihara next to the Swayambunath Stupa.

In the year 1981, after the 16th Karmapa passed away, the Shamarpa shouldered the responsibility of the projects which the 16th Karmapa had initiated before his death. One of them was the construction of the Karmapa International Buddhist Institute in New Delhi, India. This institute has offered courses of higher Buddhist studies to students and scholars from all over the world until this day. It has been an affiliate of Indian Universities for some years, and is recognized by many educational institutions around the world.

Additionally, since the passing away of the 16th Karmapa, Shamar Rinpoche had continued to care for the monks and nuns of the lineage and provide them with education. He ensured that tantric rites and pujas were conducted at all the Karmapa’s monasteries in strict adherence to Kagyu traditions. Last but not least, in accordance with the wishes of the late 16th Karmapa, he had hundreds of volumes of the Tengyur, the commentaries to sutras and tantras, be printed and brought as gifts to many Buddhist temples and monasteries inside and outside of India. He also printed and distributed the complete collection of Indian and Tibetan Mahamudra works.

When he heard of a young boy with special qualities living in Lhasa, Shamarpa arranged for him to be visited by trusted lamas, eventually becoming convinced that this was indeed the long-awaited reincarnation of the 16th Karmapa. His choice was furthermore in agreement with a vision of the universally regarded saint Chobgye Trichen Rinpoche and was further confirmed on the basis of the child’s self-proclamation as the Karmapa. His personal visions in his capacity as the Shamarpa as well as divination rites performed at the sacred site of the self-arisen Jowo-Zamling Karpo (Chenresig statue) in Kathmandu as well as the Tara statue outside of Kathmandu also further confirmed Trinley Thaye Dorje as the genuine Karmapa.

Thus, as so many of his predecessors had done, Shamarpa recognized the boy Thaye Dorje as the 17th Karmapa, officially enthroning him as the Karmapa in the Karmapa International Buddhist Institute (KIBI) in New Delhi in 1994. In 1996 he performed the traditional hair-cutting ceremony for him in Bodh Gaya.

As lineage holder, Shamarpa naturally became the root teacher of the 17th Karmapa, and returned to him the entirety of the Kagyu lineage transmission, fully training and empowering him. On Dec. 1st, 2003 he conferred the title of a Vidyadhara (sometimes also called Vajracarya) on him, confirming him as the leader of the Karma Kagyu tradition.

Shamarpa travelled widely and taught thousands of students worldwide. In the 1990s, he started to set up a worldwide organization called Bodhi Path with the aim of offering Buddhist practice free from any sectarianism, and he continued to teach worldwide both in his own Bodhi Path centers as well as in other centers associated with the Karmapa.

In 2002 Shamarpa established a primary school near Darjeeling, followed by the Shri Diwakar Institute at Kalimpong, which was designed to provide a ten-year curriculum of Buddhist studies for a few hundred monks. His next most important project was to be the Shar Minub Institute in Kathmandu, Nepal, devoted to higher Buddhist studies, research, and retreat, with accomodation for a thousand monks. Meanwhile in Tibet, the traditional seat of the Shamarpas at Yangpachen had been rebuilt as an institute for higher Buddhist studies. Not limited to projects of his own, the Shamarpa had contributed also to the rebuilding and development in Tibet of many institutions and monasteries. Close to the Shar Minub Institute in Kathmandu, Shamarpa established a special retreat center which has been operating for many years. It is a place for senior monks upholding the Vinaya vows who are dedicated to a life-long practice of their vows along with the practice of Mahamudra.

Shamarpa wrote several books on Buddhist practice, and also about democracy, demonstrating his interest not in politics, which he always tried to avoid, but in bettering the lives of ordinary people. He also founded the Infinite Compassion Foundation to promote the humane treatment of animals.

The 14th Shamar Rinpoche Mipham Chokyi Lodro passed away aged 62 at his Bodhi Path centre in Renchen-Ulm, Germany, on 11 June 2014. For three days he remained in his post-mortem meditation state, or tugdam. He left this state on the full-moon day in June, the day which commemorates the birth, enlightenment and parinirvana of the Buddha. His mortal remains were first brought to India and then via Bhutan to Nepal, where the cremation took place.

The previous Shamarpas have been authenticated in accordance with the principle of reciprocal recognition — by the Karmapa that they themselves recognised. In this way, relying on their unparalleled spiritual realization and operating outside of politics, the Red Hat and Black Hat Karmapas have been authentically recognized and trained and thus continue as the oldest reincarnate lineages in Tibetan Buddhism. 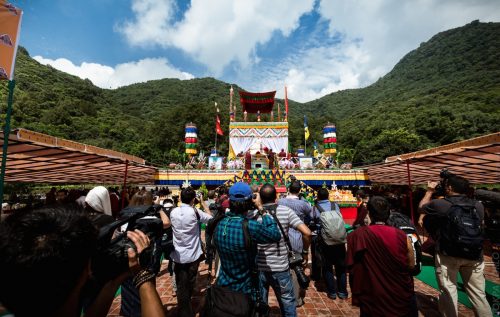 Thousands of devotees from all around the world attended Shamar Rinpoche’s cremation.

Thaye Dorje, His Holiness the 17th Gyalwa Karmapa, talks about the passing of Shamar Rinpoche in this official address.