Join Karmapa at the Kagyu Monlam in Bodh Gaya

Thaye Dorje, His Holiness the 17th Gyalwa Karmapa, invites students around the world to join him under the Bodhi Tree in Bodh Gaya, as he presides over prayers at the annual Kagyu Monlam, 16-22 December 2018.

The Kagyu Monlam is the most significant event of the year for the Karma Kagyu lineage. Tens of thousands of students, monks, nuns and other venerables come together in the place where Buddha attained enlightenment, as Karmapa leads prayers for the benefit of all sentient beings.

The main prayer recited at the Kagyu Monlam is known as the ‘King of Aspiration Prayers’ or the ‘Samantabhadra Wishing Prayer’. As Karmapa has said,

When we come together to the sacred place where Gautama Buddha reached enlightenment, and offer aspirations for peace and prosperity for all beings, the merit, wisdom and benefit that is accumulated is tremendous.

Practitioners around the world are invited to join Karmapa, in person or online. Several of the teachings will be live streamed so that students who are not able to travel to Bodh Gaya can still join Karmapa and their fellow Karma Kagyu students. Details for the streaming will be published in the coming weeks.

In addition to presiding over prayers at the Mahabodhi Stupa in Bodh Gaya, Karmapa will also be leading the Fourth International Karma Kagyu Meeting, and engaging in local community and charitable activities through his South Asian Buddhist Association (SABA). 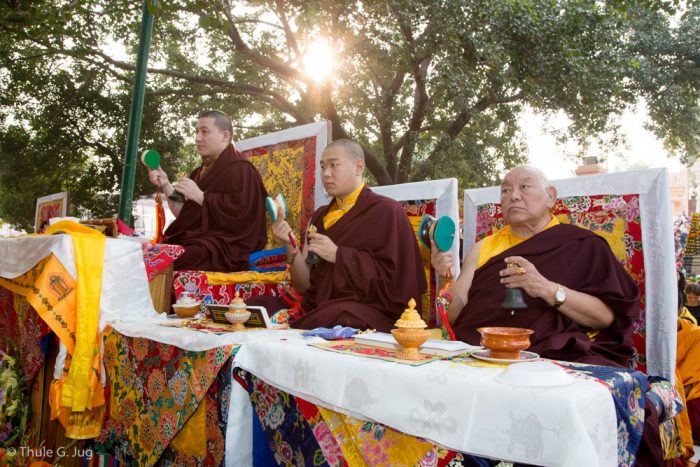 Left to right: Thaye Dorje, His Holiness the 17th Gyalwa Karmapa, His Eminence Jamgon Kongtrul Rinpoche, and His Eminence Beru Khyentse Rinpoche at the Kagyu Monlam in Bodh Gaya, December 2017