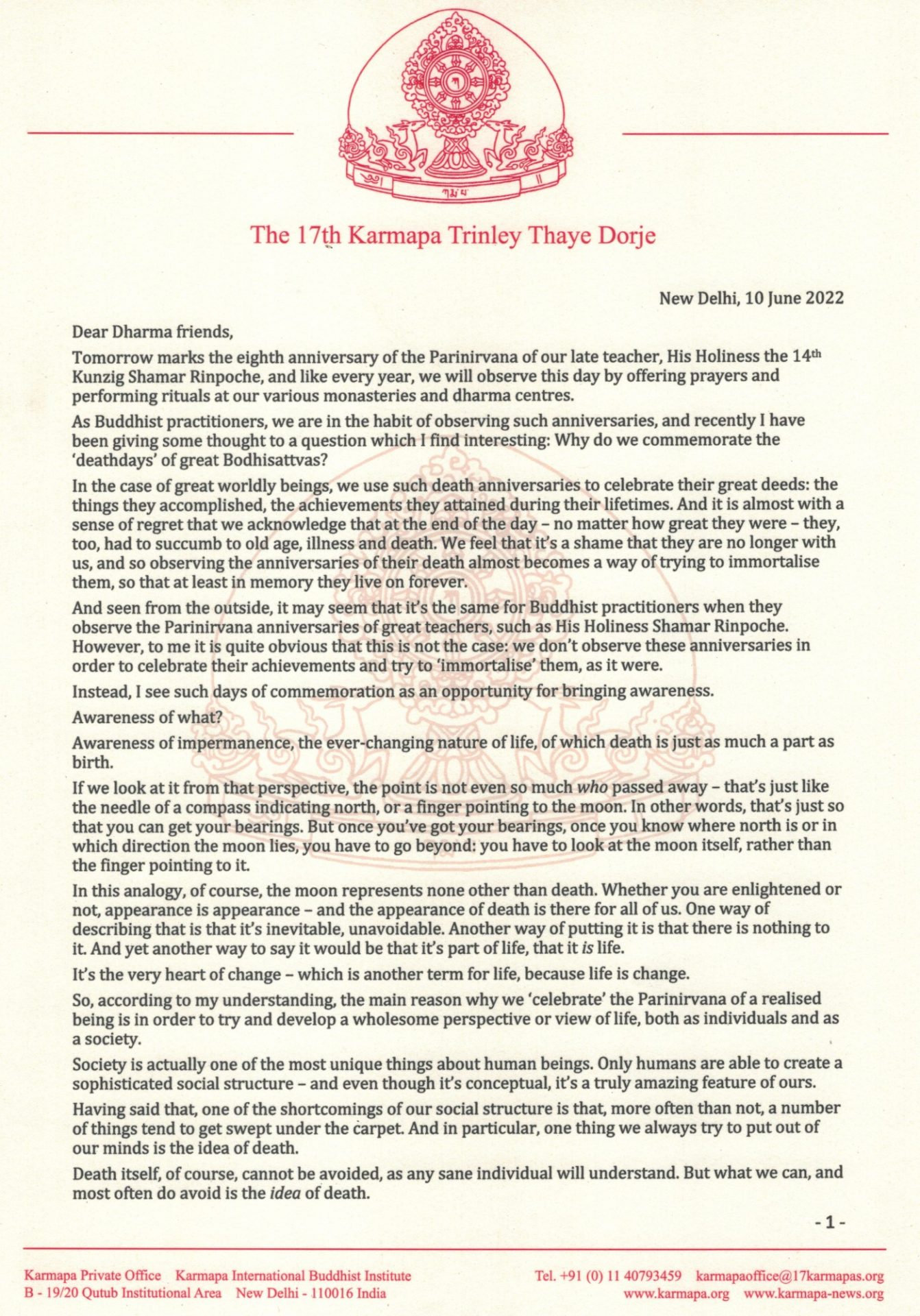 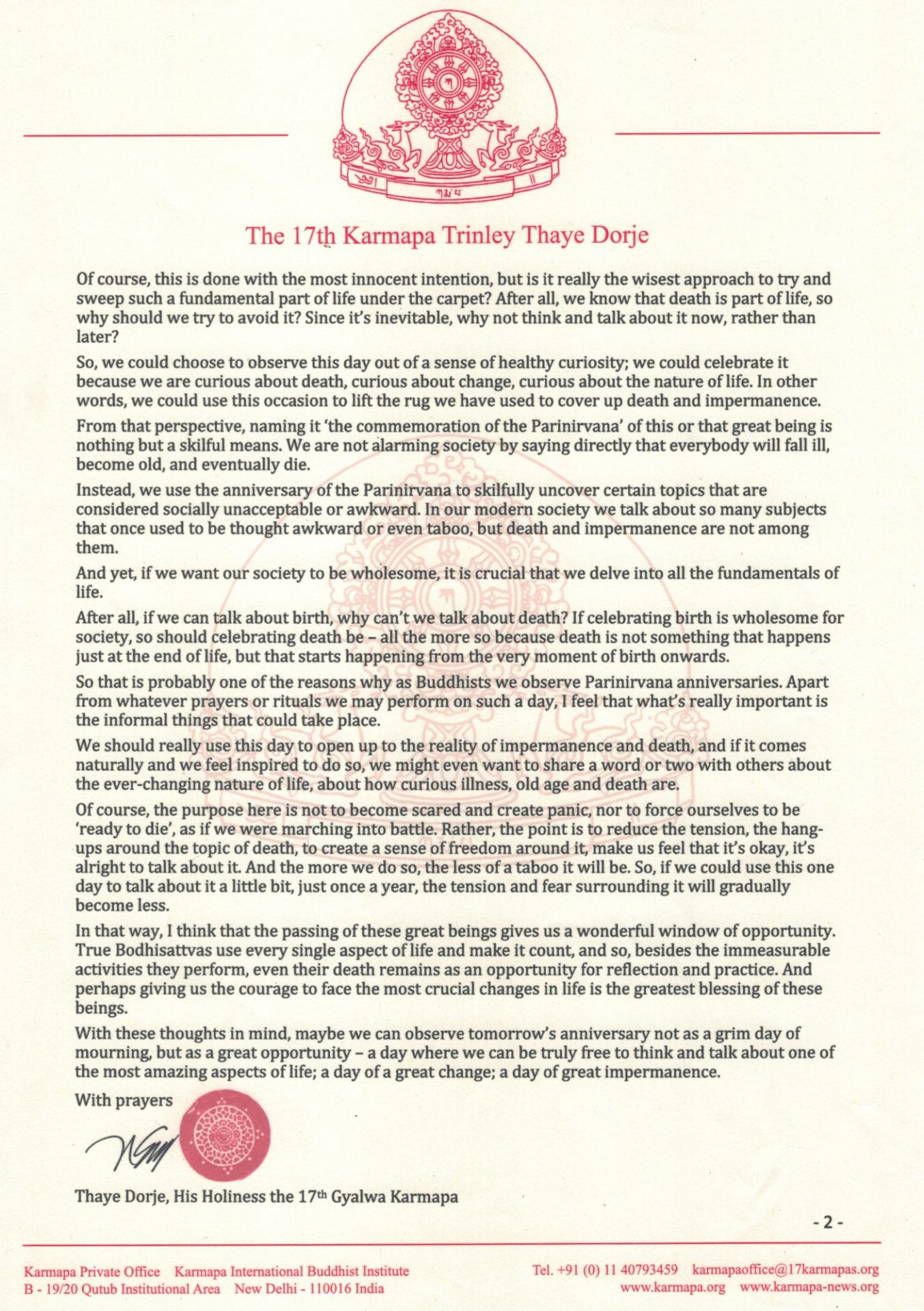 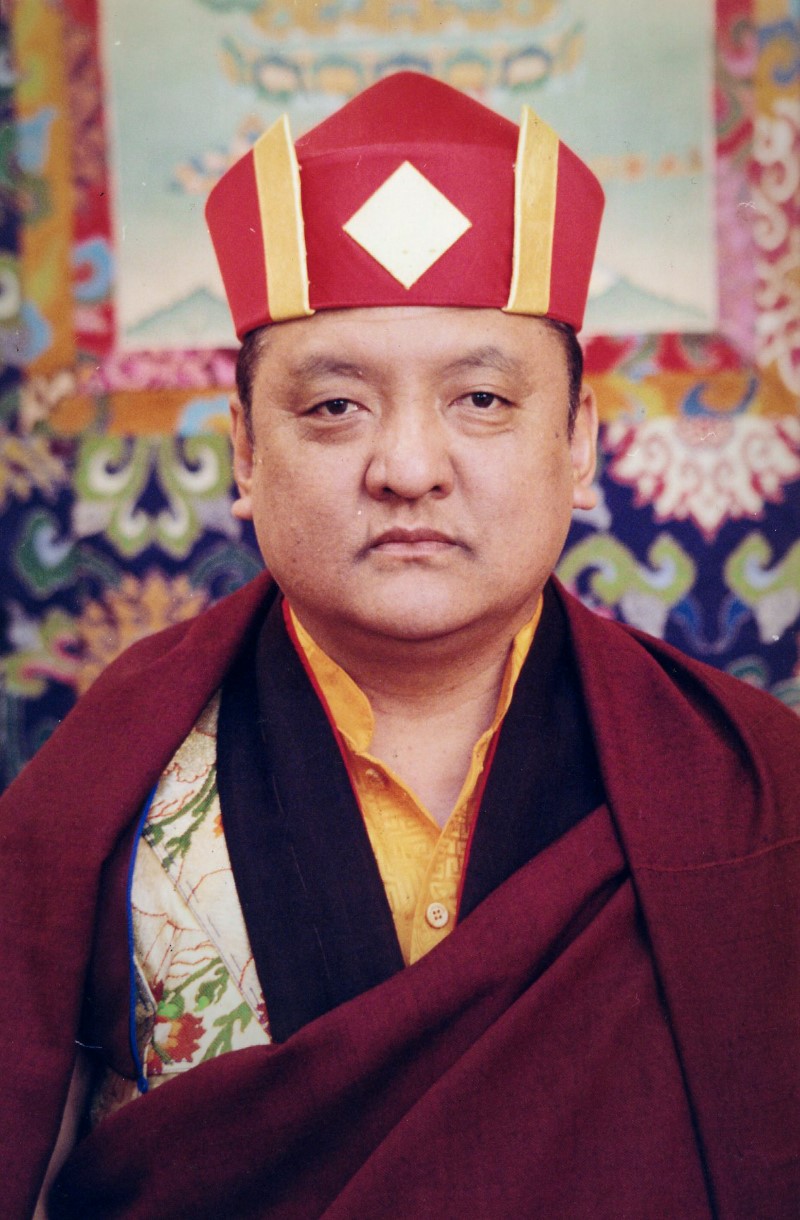 Tomorrow marks the eighth anniversary of the Parinirvana of our late teacher, His Holiness the 14th Kunzig Shamar Rinpoche, and like every year, we will observe this day by offering prayers and performing rituals at our various monasteries and dharma centres.

As Buddhist practitioners, we are in the habit of observing such anniversaries, and recently I have been giving some thought to a question which I find interesting: Why do we commemorate the ‘deathdays’ of great Bodhisattvas?

In the case of great worldly beings, we use such death anniversaries to celebrate their great deeds: the things they accomplished, the achievements they attained during their lifetimes. And it is almost with a sense of regret that we acknowledge that at the end of the day – no matter how great they were – they, too, had to succumb to old age, illness and death. We feel that it’s a shame that they are no longer with us, and so observing the anniversaries of their death almost becomes a way of trying to immortalise them, so that at least in memory they live on forever.

And seen from the outside, it may seem that it’s the same for Buddhist practitioners when they observe the Parinirvana anniversaries of great teachers, such as His Holiness Shamar Rinpoche. However, to me it is quite obvious that this is not the case: we don’t observe these anniversaries in order to celebrate their achievements and try to ‘immortalise’ them, as it were.

Instead, I see such days of commemoration as an opportunity for bringing awareness.

Awareness of impermanence, the ever-changing nature of life, of which death is just as much a part as birth.

If we look at it from that perspective, the point is not even so much who passed away – that’s just like the needle of a compass indicating north, or a finger pointing to the moon. In other words, that’s just so that you can get your bearings. But once you’ve got your bearings, once you know where north is or in which direction the moon lies, you have to go beyond: you have to look at the moon itself, rather than the finger pointing to it.

In this analogy, of course, the moon represents none other than death. Whether you are enlightened or not, appearance is appearance – and the appearance of death is there for all of us. One way of describing that is that it’s inevitable, unavoidable. Another way of putting it is that there is nothing to it. And yet another way to say it would be that it’s part of life, that it is life.

It’s the very heart of change – which is another term for life, because life is change.

So, according to my understanding, the main reason why we ‘celebrate’ the Parinirvana of a realised being is in order to try and develop a wholesome perspective or view of life, both as individuals and as a society.

Society is actually one of the most unique things about human beings. Only humans are able to create a sophisticated social structure – and even though it’s conceptual, it’s a truly amazing feature of ours.

Having said that, one of the shortcomings of our social structure is that, more often than not, a number of things tend to get swept under the carpet. And in particular, one thing we always try to put out of our minds is the idea of death.

Death itself, of course, cannot be avoided, as any sane individual will understand. But what we can, and most often do avoid is the idea of death.

Of course, this is done with the most innocent intention, but is it really the wisest approach to try and sweep such a fundamental part of life under the carpet? After all, we know that death is part of life, so why should we try to avoid it? Since it’s inevitable, why not think and talk about it now, rather than later?

So, we could choose to observe this day out of a sense of healthy curiosity; we could celebrate it because we are curious about death, curious about change, curious about the nature of life. In other words, we could use this occasion to lift the rug we have used to cover up death and impermanence.

From that perspective, naming it ‘the commemoration of the Parinirvana’ of this or that great being is nothing but a skilful means. We are not alarming society by saying directly that everybody will fall ill, become old, and eventually die.

Instead, we use the anniversary of the Parinirvana to skilfully uncover certain topics that are considered socially unacceptable or awkward. In our modern society we talk about so many subjects that once used to be thought awkward or even taboo, but death and impermanence are not among them.

And yet, if we want our society to be wholesome, it is crucial that we delve into all the fundamentals of life.

After all, if we can talk about birth, why can’t we talk about death? If celebrating birth is wholesome for society, so should celebrating death be – all the more so because death is not something that happens just at the end of life, but that starts happening from the very moment of birth onwards.

So that is probably one of the reasons why as Buddhists we observe Parinirvana anniversaries. Apart from whatever prayers or rituals we may perform on such a day, I feel that what’s really important is the informal things that could take place.

We should really use this day to open up to the reality of impermanence and death, and if it comes naturally and we feel inspired to do so, we might even want to share a word or two with others about the ever-changing nature of life, about how curious illness, old age and death are.

Of course, the purpose here is not to become scared and create panic, nor to force ourselves to be ‘ready to die’, as if we were marching into battle. Rather, the point is to reduce the tension, the hang-ups around the topic of death, to create a sense of freedom around it, make us feel that it’s okay, it’s alright to talk about it. And the more we do so, the less of a taboo it will be. So, if we could use this one day to talk about it a little bit, just once a year, the tension and fear surrounding it will gradually become less.

In that way, I think that the passing of these great beings gives us a wonderful window of opportunity. True Bodhisattvas use every single aspect of life and make it count, and so, besides the immeasurable activities they perform, even their death remains as an opportunity for reflection and practice. And perhaps giving us the courage to face the most crucial changes in life is the greatest blessing of these beings.

With these thoughts in mind, maybe we can observe tomorrow’s anniversary not as a grim day of mourning, but as a great opportunity – a day where we can be truly free to think and talk about one of the most amazing aspects of life; a day of a great change; a day of great impermanence.