Thaye Dorje, His Holiness the 17th Gyalwa Karmapa, shares the following message about the passing of Thich Nhat Hanh. 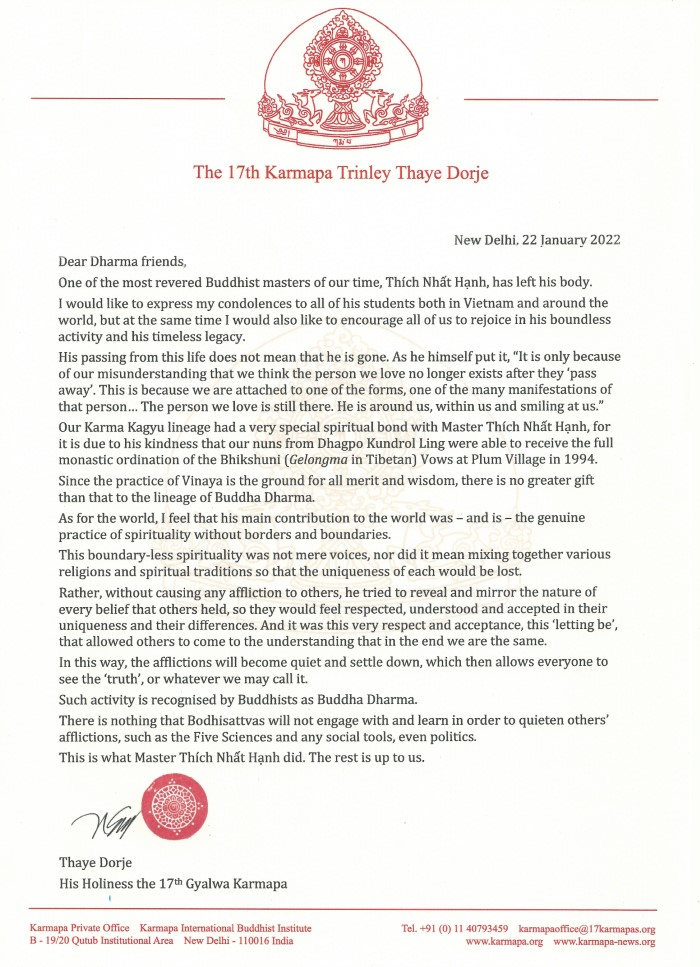 One of the most revered Buddhist masters of our time, Thích Nhất Hạnh, has left his body.

I would like to express my condolences to all of his students both in Vietnam and around the world, but at the same time I would also like to encourage all of us to rejoice in his boundless activity and his timeless legacy.

His passing from this life does not mean that he is gone. As he himself put it, “It is only because of our misunderstanding that we think the person we love no longer exists after they ‘pass away’. This is because we are attached to one of the forms, one of the many manifestations of that person… The person we love is still there. He is around us, within us and smiling at us.”

Our Karma Kagyu lineage had a very special spiritual bond with Master Thích Nhất Hạnh, for it is due to his kindness that our nuns from Dhagpo Kundrol Ling were able to receive the full monastic ordination of the Bhikshuni (Gelongma in Tibetan) Vows at Plum Village in 1994.

Since the practice of Vinaya is the ground for all merit and wisdom, there is no greater gift than that to the lineage of Buddha Dharma.

As for the world, I feel that his main contribution to the world was – and is – the genuine practice of spirituality without borders and boundaries.

This boundary-less spirituality was not mere voices, nor did it mean mixing together various religions and spiritual traditions so that the uniqueness of each would be lost.

Rather, without causing any affliction to others, he tried to reveal and mirror the nature of every belief that others held, so they would feel respected, understood and accepted in their uniqueness and their differences. And it was this very respect and acceptance, this ‘letting be’, that allowed others to come to the understanding that in the end we are the same.

In this way, the afflictions will become quiet and settle down, which then allows everyone to see the ‘truth’, or whatever we may call it.

Such activity is recognised by Buddhists as Buddha Dharma.

There is nothing that Bodhisattvas will not engage with and learn in order to quieten others’ afflictions, such as the Five Sciences and any social tools, even politics.

This is what Master Thích Nhất Hạnh did. The rest is up to us. 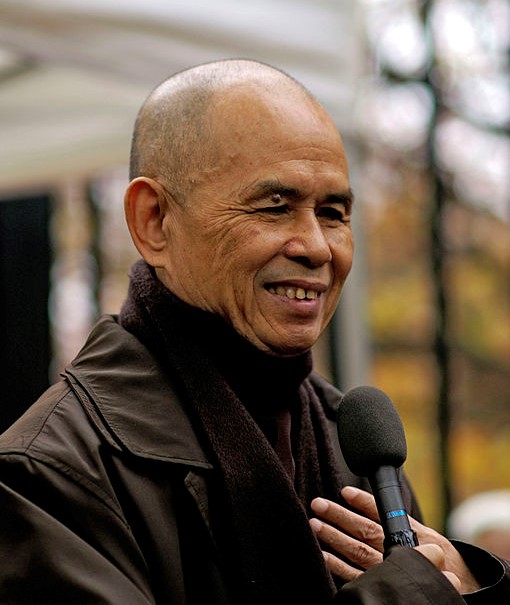