The Birthday of King Jigme Singye

Thaye Dorje, His Holiness the 17th Gyalwa Karmapa, calls for students to join him in prayer on the occasion of the sixtieth birthday of King Jigme Singye, the Fourth Druk Gyalpo of the Kingdom of Bhutan. Please read the letter and share it with fellow students and dharma friends. 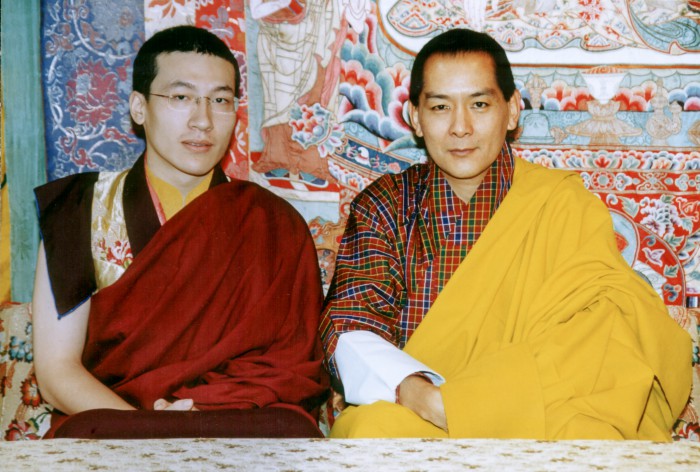 Thaye Dorje, His Holiness the 17th Gyalwa Karmapa, with King Jigme Singye in 2003 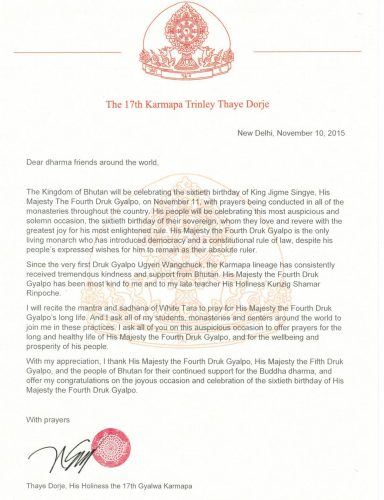 Dear dharma friends around the world,

The Kingdom of Bhutan will be celebrating the sixtieth birthday of King Jigme Singye, His Majesty The Fourth Druk Gyalpo, on November 11, with prayers being conducted in all of the monasteries throughout the country. His people will be celebrating this most auspicious and solemn occasion, the sixtieth birthday of their sovereign, whom they love and revere with the greatest joy for his most enlightened rule. His Majesty the Fourth Druk Gyalpo is the only living monarch who has introduced democracy and a constitutional rule of law, despite his people’s expressed wishes for him to remain as their absolute ruler.

Since the very first Druk Gyalpo Ugyen Wangchuck, the Karmapa lineage has consistently received tremendous kindness and support from Bhutan. His Majesty the Fourth Druk Gyalpo has been most kind to me and to my late teacher His Holiness Kunzig Shamar Rinpoche.

I will recite the mantra and sadhana of White Tara to pray for His Majesty the Fourth Druk Gyalpo’s long life. And I ask all of my students, monasteries and centers around the world to join me in these practices. I ask all of you on this auspicious occasion to offer prayers for the long and healthy life of His Majesty the Fourth Druk Gyalpo, and for the wellbeing and prosperity of his people.

With prayers
Thaye Dorje, His Holiness the 17th Gyalwa Karmapa

Some thoughts on peace

231,683 Friends
8,800 Followers
14509 Followers
We use cookies to understand our web traffic and to allow users to log in. By continuing to use this site, you indicate that you agree to this.OK