Karmapa has something special and personal to share with you…

Thaye Dorje, His Holiness the 17th Gyalwa Karmapa, is delighted to share the wonderful news that he has married in a private ceremony.

Following the precious footprints of Khakyab Dorje, His Holiness the 15th Karmapa, who was also married and a Tertön, Karmapa hopes that his karmic connection with his wife, Rinchen Yangzom, will further strengthen the Karma Kagyu lineage and the Kagyu school of Tibetan Buddhism.

Both the 15th and 17th Karmapas have now married

My role and activities as Karmapa will continue as before – with the single exception of conducting ordinations. This responsibility will pass on to His Eminence 4th Jamgon Kongtrul Rinpoche, Karma Mingyur Dragpa Senge. As Karmapa, I will continue to protect and preserve our beloved lineage, and strengthen the monastic sangha through initiatives such as the new Karmapa Center of Education.

I have a strong feeling, deep within my heart, that my decision to marry will have a positive impact not only for me, but also for the lineage. Following the wishes of my parents, and having had time to reflect, I deeply feel that I am being true to both myself and the lineage. Something beautiful, something beneficial will emerge, for all of us.

The Buddhist way is to use karma for benevolence and benefit, regardless of the path we choose. For those who follow the path of an ordained life, we must encourage and respect this. In this 17th incarnation, for both the future of the lineage, and fulfilling the wishes of my parents, I have chosen a different path. At the same time, my commitment to protect and preserve the monastic sangha, and the lineage, remains paramount in my life, and my continued role as Karmapa.

Karmapa and Rinchen Yangzom were close childhood friends, and have known each other for more than 19 years in this life. Over time, and with the blessings of their beloved parents, this friendship grew into a special, spiritual bond.

Rinchen Yangzom, a Tibetan name meaning ‘Precious Prosperity Gathered,’ was born in Thimphu, Bhutan. Her parents are Mr Chencho and Mrs Kunzang. Mr Chencho is from Shaba, Drugyeldingkha, Paro, in Western Bhutan. He is a businessman. Mrs Kunzang is from Choeten Nyingpo, Chumey, Bumthang, in Central Bhutan, the Densa of Yab Tenpai Nyima. She is a homemaker. Rinchen Yangzom is the third of Mr Chencho’s and Mrs Kunzang’s ten children.

Rinchen Yangzom started her early education in Thimphu, Bhutan. Her middle and higher education took place in India, and she continued her undergraduate studies in Europe. 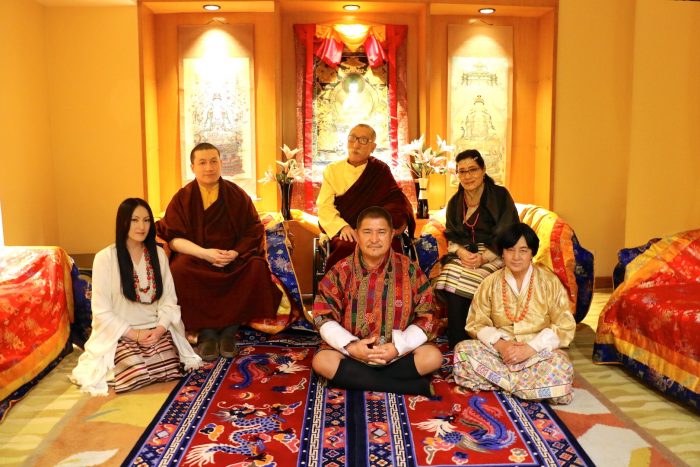 On 19th January 2017, Karmapa proposed to Rinchen Yangzom, according to Tibetan traditions. Upon the aspirations of Karmapa’s father, His Eminence Mipham Rinpoche, an auspicious date was set for the engagement and marriage ceremony. The marriage took place on 25th March 2017, in the presence of close family members.

Karmapa appreciates that the news of his marriage will come as a surprise to many, and has faith that his students will understand his wish to have kept private this personal element of his very public life.

Karmapa and Rinchen Yangzom will mark their first public appearance together at the Kagyu Monlam in Bodhgaya, in December 2017. Karmapa hopes and prays that you will be able to join him in person or via the live stream. For now, Karmapa, as always, appreciates all of your aspirations.

Karmapa’s continued activities include, but are not limited to: