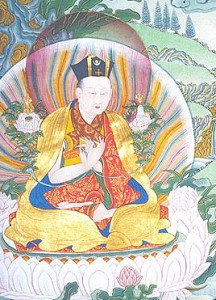 Two more years were to pass before he met Drubtob Urgyenpa, who recognized the child as the reincarnation of Karma Pakshi. He gave him the possessions of the second Karmapa and transmitted all the Kagyu teachings to him. The education and training of the third Karmapa began at the age of seven, when he received the novice ordination from Lama Kunden Sherab and his formal enthronement as the Karmapa at Tsurphu monastery. For the next eleven years he studied the complete teachings of the Kagyus and Nyingmas in Tsurphu.

Rangjung Dorje then sought out masters of all the Buddhist traditions of the time, studying with, among others, Trophu Kunden Sherab and Nyenre Gendun Bum. He also entered into intensive meditation retreats. As a result, he achieved great fame, and attracted many disciples. He built monasteries and meditation centres as well as bridges, benefiting his countrymen’s daily life as well as their spiritual life. For posterity, he wrote numerous texts and commentaries, preserving many of the teachings in a form used until today. He also accepted invitations to teach the Chinese emperor and thus travelled twice from Tibet to China, where he passed away. It is said that on the night of his passing away, his face appeared clearly visible in the moon.

His two main disciples were Gyalwa Yungton Dorje Pal, who was to become the next lineage holder, and the first Shamarpa, Khedrup Dragpa Senge. The Shamarpas are the second-oldest line of reincarnates in Tibetan Buddhism. The word means ‘Holder of the Red Crown’, and in early writings the Shamarpa is sometimes referred to simply as “Karmapa”, the colour of the hats being the only way to distinguish them.

The Shamarpa line began when Rangjung Dorje gave Khedrup Dragpa Senge a Red Crown which was an exact replica of the Black Crown worn by the Karmapas. The two crowns symbolise the relationship between Karmapa and Shamarpa and do not signify separate lineages. Thus they were known as the “Black Hat and the Red Hat Karmapa”. The Shamarpas are also seen as a manifestation of Amitabha, the Buddha of Limitless Light.