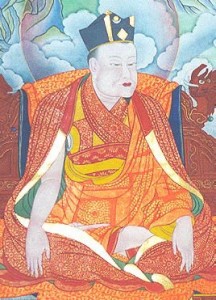 From Chilay Tsakto in eastern Tibet, the second Karmapa, Karma Pakshi (1204-1283), was something of a child prodigy. By the age of six, he had taught himself to read and write. At ten, he was displaying a photographic memory for texts and he was said to have already grasped the essence of the Buddhist doctrine.

In addition to his intellectual ability, the young boy had the intuitive aptitude for resting the mind in stillness. Therefore, when Pomdragpa introduced him to the nature of his own mind, he was able to develop spontaneous insight. On his way to Central Tibet for further education, he had encountered Pomdragpa Sonam Dorje, who had been told in a vision by Dusum Khyenpa, the first Karmapa, that this boy would become the next lineage holder. In another vision, Dusum Khyenpa revealed to Pomdragpa that the boy was in fact his incarnation. From this time on, Pomdragpa recognized him as the second Karmapa, thus establishing the first line of reincarnated lamas in Tibet.

For eleven years Karma Pakshi studied with Pomdragpa, specializing in the Mahamudra teachings of Saraha and Gampopa, and received the entire Kagyu transmission. Karma Pakshi also travelled in Kham, and as he and his monks chanted the mantra of Chenresig, Om mani peme hung, while travelling, the communal recitation of this mantra became customary in Tibet.

In Kham, Karma Pakshi built new monasteries, restored old ones, and engaged in intensive meditation practice. In time, he became renowned for his powers. He was invited to his court by the Mongolian Prince Kublai. Over the years, Karma Pakshi became the teacher of Mongka Khan and Kublai Khan and travelled widely throughout the northern and eastern part of Tibet. In time, he attracted many students throughout Tibet, China and Mongolia. Before his death, Karma Pakshi transmitted the lineage to his student Drubtob Urgyenpa and informed him that his next incarnation would come from western Tibet.