The Brno Centre is the second biggest of more than 35 Diamond Way Buddhist centres in the Czech Republic established by Lama Ole Nydahl and working under the spiritual guidance of the 17th Karmapa Thaye Dorje. A stable meditation group appeared in Brno in September 1998. Since 1999, the centre had functioned in a former kindergarten. In 2003, the house and its land were purchased and became the property of the Nydahl Endowment Fund, which is in charge of the Czech Diamond Way Buddhist assets.
The 17th Gyalwa Karmapa visited our centre in 2004. Karmapa Thaye Dorje was shown round the building and blessed it. 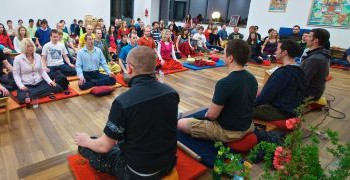