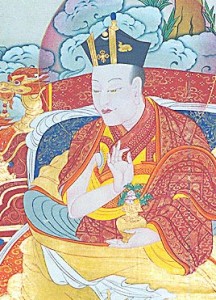 The ninth Karmapa, Wangchuk Dorje (1556-1603), was born in the Treshod region of east Tibet. It is said that he, too, sat up at birth and declared “I am the Karmapa!”. Not surprisingly, this caused a fair amount of talk in the neighbourhood, which reached the ears of Kyamo Nangso Chokyong Tashi, a student of Mikyo Dorje who had been told by his master that he would serve him once again in his next incarnation.

He went to see the child, and took him to Kyamo Lhundrub Tse Monastery. Eventually Shamar Konchog Yenlag and Situ Chokyi Gocha heard of this special child, and determined that he was indeed the Karmapa. At the age of six, Wangchuk Dorje was enthroned by Shamar Rinpoche.

He also received refuge and bodhisattva vows and the empowerment of Amitayus as well as many other textual transmissions and teachings. Shamarpa continued to teach the young Karmapa, giving him the textual transmission of texts from the Tripitaka and certain Kagyupa texts. While travelling from Kham to Central Tibet, he received comprehensive training and the complete Kagyu transmission.

Taking up his main seat in Tsurphu in central Tibet, he also spent time in intensive meditation retreat and authored important texts for the practice of Mahamudra, which are still in use today. In teaching, Wangchuk Dorje emphasized the texts of the 8th Karmapa. He established a retreat center where the 3rd Karmapa had meditated, declined an invitation to China, but accepted an invitation to Outer Mongolia by the King Hortu.

He travelled far and wide in Tibet, frequently acting as arbitrator in local disputes, and taking steps to improve the living conditions of the people; as a result he was regarded as the secular leader of Tibet as well as a great religious leader. Among his principal students were Taranatha, Situ Chokyi Gyaltsen, Pawo Tsuglag Gyatsho, and the 6th Shamar reincarnation, Chokyi Wangchuk, whom Karmapa Wangchuk Dorje recognized and installed as his lineage holder.