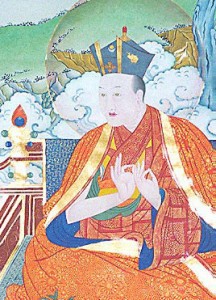 At his birth in Nagam Chu province, in eastern Tibet, the eighth Karmapa, Mikyo Dorje (1507-1554), is said to have opened his eyes and said “Karmapa”. His father sought out Situ Tashi Namgyal, to request advice about his remarkable son. He was told the child was probably the Karmapa reincarnation, and was instructed to care for and raise him with that in mind.

Almost simultaneously, a family from Amdo brought forward their son’s claim to be the Karmapa. Gyaltsab Tashi Namgyal was asked to investigate the claims about this second child. Meanwhile, the first child had been taken to Lho Rong, in Riwo Che province, where a number of the previous Karmapa’s disciples had gathered. They were convinced that this was the reincarnation of their teacher.

And so began a trying period, as the two factions each persisted in supporting their particular candidate. Finally, Gyaltsab arranged for the two children to meet and to be tested. Following tradition, each was asked to select the possessions of the previous Karmapa from a random assortment of objects.

Mikyo Dorje proved able to choose the correct objects – his rival was not. Thus it was Mikyo Dorje who was proclaimed Karmapa, and immediately announced that his rival from Amdo was, in fact, the reincarnation of Zurmang Chungtsang from Zurmang Monastery in the east of Tibet.

The 8th Karmapa Mikyo Dorje’s education started when he was eight years old. He received the entire range of Kagyu teachings from Tashi Paljor, and rounded off his studies with a range of accomplished masters. Among his teachers was Karma Thinleypa, with whom he stayed, in all, for three years, studying the treatises of Maitreya, Dignaga and Dharmakirti as well as the principal texts of Nagarjuna and Candrakirti and tantras such as the Hevajra tantra and other Indian works on the Mahayana and Vajrayana approaches to Buddhism. At the conclusion of his intellectual studies, Mikyo Dorje devoted more of his time to meditation.

Being one of the most brilliant philosophers of Tibetan Buddhism, he went on to write a great number of substantial philosophical treatises and important texts on Mahamudra, and founded several monastic colleges. In honor of his teacher Sangye Nyenpa Tashi Paljor, he composed the spiritual practice called the Guru Yoga of the Four Sessions (Tib. tun shi lame naljor). He also ventured into the fields of poetry, painting and sculpture and was an example of austerity and simplicity. As a master of Mahamudra, he lived in the realization that whatever arises is self-liberated.

He selected as lineage holder the fifth Shamarpa, Konchog Yenlag, whose incarnation he had recognised, and to whom he had passed on the Kagyu transmission, stating that the Karmapa and Shamarpa incarnations are inseparable, and of the same mind-stream.