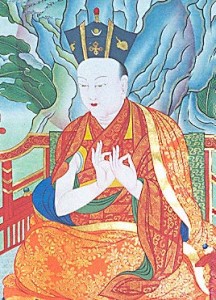 The 7th Karmapa, Chodrag Gyamtso (1454-1506), was from Kyilha in Northern Tibet. As a young infant he was recognized to be an incarnation of a spiritual teacher. One day, he spontaneously uttered the seed syllables Ah and Hung, and declared “There is nothing in the world but emptiness. People may think there is substantiality, but they are in error. For me there is neither birth nor death.”

Gyaltsab Paljor Dondrup recognized the infant as the new Karmapa incarnation and enthroned him. Aged four, Chodrag Gyamtso was given a series of empowerments by Goshir Paljor Dondrup, and at eight, at Karma Gon, he was given the Kagyu teachings from Bengar Jampal Zangpo and Goshir Paljor Dondrub. He then travelled to southern Tibet and from there slowly to Kham where he went through an intensive period of study.

At age seventeen, being highly acknowledged as a consummate scholar despite his young age, he entered into a period of seven years of meditation to complete his training. He travelled back to southern Tibet and as his fame had spread as far as India and China, several noted Indian scholars came to see the 7th Karmapa.

He received an invitation from the emperor of China to visit him, but the Karmapa was unable to do so at that time. He continued to travel to Lhasa, was greeted by the monks from the Gelugpa monasteries of Drepung and Ganden and taught many monks at Rinpung including Shakya Chogden. The 7th Karmapa went on to teach and give empowerments throughout Tibet, and to write many texts and commentaries, in particular on the theory of perception.

Wherever he went, several thousand students travelled with him in tents, following a path of study and meditation. In this way he met the 4th Shamarpa, to whom he imparted the teachings of the lineage. Another of his students was Denma Drubchen Tashi Paljor, who became the next lineage holder.