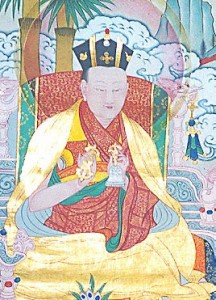 Deshin Shegpa, the fifth Karmapa, (1384-1415), was born in the Nyang Dam region of southern Tibet. It is said that immediately after his birth he sat up, wiped his face and declared “I am the Karmapa – Om mani peme hung hri“. Rinchen Pal, the secretary to the third Karmapa, who identified and became secretary to the fourth Karmapa, also located this child, and in due course served him as secretary for the third time.

Deshin Shegpa was brought to Tsawa Phu in Kongpo, where a significant number of the fourth Karmapa’s disciples were living. Shamar Kacho Wangpo immediately recognised the child as the incarnation of Rolpe Dorje, and presented him with the Black Crown and other possessions of the 4th Karmapa. He went on to give Karmapa the full cycle of Kagyu teachings.

This Karmapa was a famous traveller, teaching throughout Tibet, Mongolia and China, where he was invited by the Emperor, Tai Ming Chen, who became a student of Deshin Shegpa. During his journeys, he was engaged in giving many teachings to both religious and lay people. Moreover, he concerned himself with reconciliation of divided communities, and attempted to establish nonviolence as the norm of social and political behavior. He also created protected reserves for wild animals.

While teaching the emperor and giving him initiations over the course of fifteen days, a series of unusual signs and miracles appeared, which the emperor later had painted on large rolls of silk and described in five languages. It is said that the emperor even saw the original black crown that is always said to be over the head of the Karmapas, which was offered to the first Karmapa by the dakinis. He requested Karmapa Deshin Shegpa’s permission to make a duplicate of this crown, which he wanted to present to him so that everyone would be able to witness this hat. The Karmapa agreed and blessed this hat, which was ornamented with precious gems and gold.

From this time on, the ceremony of the black vajra crown has become an integral feature of the dharma activity of the Karmapas. Returning to Tibet after some years, Karmapa built many shrines and stupas, and continued to teach and give empowerments. He found the next Shamar reincarnation, Chopal Yeshe, arranged his ordination, and gave him the Kagyu transmission. The next lineage holder was his student Ratnabhadra, Rinchen Zangpo.