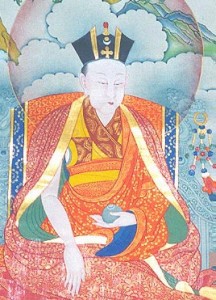 The fourth Karmapa, Rolpe Dorje (1340-1383) emulated his previous incarnation by sitting up at his birth, in Kongpo province in central Tibet, and speaking – this time choosing to recite the mantra of Chenrezig, Om mani peme hung hri.

Having – in his previous incarnation – left clear instructions with his secretary, Rinchen Pal, as to which signs to look for, the child was quickly found, and his training begun. At six he took refuge vows and the lay precepts from Tokden Gon Gyalwa, who also taught the young Karmapa the Tantrayana.

He was twelve before, travelling to Central Tibet, he met the lineage holder Gyalwa Yungton Dorje Pal, who requested him to tell him what he remembered from his previous lives. Karmapa Rolpe Dorje replied that he was not able to recall his life as Dusum Khyenpa very clearly, but that he could remember a little of his life as Rangjung Dorje and that he recalled his life as Karma Pakshi perfectly. When Yungton Dorje Pal heard the accounts which the boy told him, he became convinced of his authenticity. He transmitted to him the full range of teachings of the Kagyu and Nyingma traditions.

At the age of eighteen he was ordained a monk by the Abbot Dondrup Pal Rinpoche. Once his education at the hands of his former student was completed, Rolpe Dorje travelled widely through Tibet and China, teaching disciples. Just like his predecessor, he was invited by the Mongol Emperor Toghon Temur to his court in Beijing, a journey that Rolpe Dorje used in order to teach, compose texts, spread the view of non-violence, restore peace, and construct monasteries. Having spent three years in China, he returned to Tibet, again tirelessly working for the benefit of others.

Whether on his journeys or staying in a monastery, Karmapa Rolpe Dorje would follow a strict regimen: From the time he awoke until nine in the morning, he performed his spiritual practices. From then until noon he gave instructions in dharma. At noon he performed prostrations and walking meditations. Throughout the afternoon he practiced Chenresig meditation, and in the evening he studied or composed texts. The nights he passed in the practice of dream yoga. As for his diet, he was a vegetarian and established this as the basic diet of his camp. Among his principal students were Drikung Chokyi Dragpa, Lopzang Dragpa Tsongkhapa and the 2nd Shamarpa Kacho Wangpo, who became the next lineage holder.