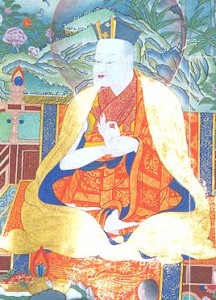 Born the son of a practising Buddhist in Ratay in East Tibet, Dusum Khyenpa (1110-1193) received his first dharma teachings from his father, and continued his education with other Buddhist teachers of the region until his twentieth year.

Then he moved to central Tibet where he spent the next twelve years in meditation and study with famous scholars, among them Chawa Chokyi Senge and Patsab Lotsawa Nyima Trag. He also received tantric teachings of the Kadampa lineage from Geshe Sharawa. At the age of twenty, Dusum Khyenpa was ordained as a monk by the abbot Mal Duldzin and studied the Vinaya with the abbot. From Ga Lotsawa, he received Kalachakra teachings. He also studied the “path and fruit” teachings of the Sakya tradition.

At the age of thirty, Dusum Khyenpa was given Kagyu teachings by Gampopa; he gave him the Hevajra-empowerment and teachings, and shamata and vipashyana instructions. Dusum Khyenpa practiced with untiring diligence. He was further connected with the lineage by teachings he received from Rechungpa and from other students of Milarepa.

It is said that at the age of fifty he attained enlightenment through the practice of dream yoga and that his realization corresponded to the fourth level of Mahamudra, which is known as “beyond meditation”. Spiritually, the moment of his enlightenment was symbolized by the visionary offering by dakinis of a black vajra crown woven out of their hair.

This crown is said to be symbolically present above the heads of all the Karmapa incarnations, signifying their realization of the true nature of reality. It was during the time of the fifth Karmapa that finally a physical replica of it was made, and since then this replica has been passed down until the present. By virtue of his spiritual realization, Dusum Khyenpa became known as the knower of the three times, past, present and future, indicating his transcending time through his understanding of the unborn nature of mind.

Dusum Khyenpa was proclaimed ‘Karmapa’ by the Kashmiri scholar Shakya Shri who declared him to be “the one of buddha-activity” (Karmapa) prophesied in the Samadhirajasutra.

At forty-four, Dusum Khyenpa left Central Tibet to return to Kham, the region of his birth, establishing thriving monasteries, sharing the Kagyu teachings, and training his students. Of these, Drogon Rechen became the next lineage holder. Towards the end of his life, Dusum Khyenpa returned to Central Tibet. There, he established his principal seat at Tsurphu, which remained the seat of the Karmapas until 1959.