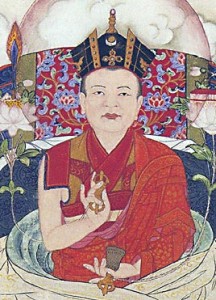 The sixteenth Karmapa, Rangjung Rigpe Dorje (1924-1981), was born at Denkhok in Derge province in east Tibet. Jampal Tsultrim, the fifteenth Karmapa’s personal attendant, had been entrusted by his master with a letter setting forth the circumstances of his new incarnation.

Jampal Tsultrim now handed this letter to the authorities at Tsurphu monastery, who – having had Beru Khyentse, Situpa and Jamgon Kongtrul clarify certain points – sent out a search party, which successfully located the child. For some years he remained in the good care of his parents. Then he was taken to Palpung Monastery where Situ Pema Wangchuk gave him ordination, bodhisattva vows, and many teachings.

In 1959 when the Chinese occupied Tibet, the Karmapa fled to India and settled in Sikkim. He also travelled to Bhutan and Ladakh and went on a pilgrimage to the holy sites of India and Nepal. In 1974 he went abroad for the first time. After that, Rangjung Rigpe Dorje travelled extensively throughout Asia and the West, established Dharma centres throughout the world and had a great number of followers.

Read the full life story of the 16th Karmapa.