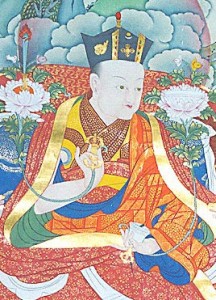 The fifteenth Karmapa, Khakyab Dorje (1871-1922) was born in Shelkor, a village in the Tsang province in central Tibet. It is said that right after his birth, he spoke the mantra of Chenrezig. At the age of five he was able to read the scriptures. At the age of six he was recognized as the Karmapa reincarnation and enthroned by the ninth Kyabgon Drukchen.

Khakyab Dorje studied with the abbot of Palpung monastery, Khenchen Tashi Ozer, and went to see Jamgon Kongtrul Lodro Thaye in Palpung monastery. From him he received the entire transmission of the Kagyu teachings, including the instructions of the Five Treasures that Kongtrul had compiled in over one hundred volumes, presenting religious thought and practice from the Rimé perspective. Kongtrul Rinpoche also gave Khakyab Dorje the Bodhisattva Vow. Khakhyab Dorje also went to see Jamyang Khyentse Rinpoche in Dzongsar to receive teachings and transmissions from him.

He went on to teach and give empowerments throughout Tibet, and preserved many rare texts by having them reprinted. Unlike the previous Karmapas, Khakyab Dorje married, and fathered three sons, two of whom he recognised as the second Jamgon Kongtrul and the twelfth Shamarpa, Jamyang Rinpoche.