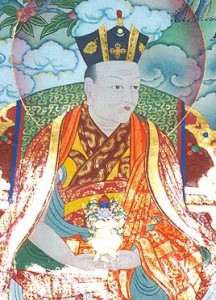 The fourteenth Karmapa, Thegchog Dorje (1798-1868), was born in the village of Danang in the Do Kham region in east Tibet. He was identified by Drukchen Kunzig Chokyi Nangwa, the holder of the thirteenth Karmapa’s letter giving the details of his forthcoming reincarnation. The ninth Situ Pema Nyinche Wangpo formally recognized Thegchog Dorje as the new Karmapa and ordained him as a novice.

For the next few years at Ogmin Ling, he studied the doctrines of the Kagyu and Nyingma traditions. After being enthroned and receiving the Black Crown, the 14th Karmapa went to Tsurphu, where he continued his studies. At the age of nineteen, he was ordained a monk by Situ Pema Nyinche Wangpo and Drukchen Kunzig Chokyi Nangwa, both of whom went on to give Karmapa the complete Kagyu transmission.

Karmapa Thegchog Dorje was an accomplished scholar and linguist. He devoted much of his time to poetry and was especially skilled in rhetoric and poetics. He was also highly expert in various arts and crafts, including sculpture and metalwork.

During his lifetime, a great Buddhist renaissance took place in Tibet, due largely to the Rimé movement, which originated in Kham and was led mainly by Khyentse Wangpo, Jamgon Kongtrul Lodro Thaye, and Terton Chogyur Lingpa, and in which the Karmapa actively participated. In the course of this development, he later found himself in the position of taking teachings from one of his close students, Jamgon Lodro Thaye, who had been fortunate enough to receive the rare Tercho teachings, which he now passed to his guru, the Karmapa.

Thegchog Dorje was renowned for his personal austerity and strictness as a monk, as well as for being the embodiment of compassion. Thegchog Dorje taught widely in Tibet and Kham. He identified and enthroned the tenth Situpa, Pema Kunzang. The transmission of the lineage he passed on to Jamgon Kongtrul Lodro Thaye, who became the next lineage holder.