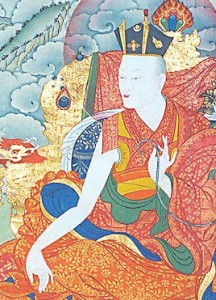 Karmapa Dudul Dorje was born at Chawa Drongsar, south Tibet and recognized by Kathog Tsewang Norbu and Situ Chokyi Jungnay. At age five he was brought to Tsurphu.

In a further escalation of the sectarian politics of the time, the then ruler of Tibet, the seventh Dalai Lama, Kalzang Gyatso, with his prime minister, Sonam Topgyal, instituted a rule that all government officials must be Gelugpa. As a consequence of this, the Dalai Lama’s approval of the new Karmapa incarnation was required.

Finally, though, the thirteenth Karmapa and the ninth Shamarpa, Geway Jungnay, were enthroned. At the age of fourteen, Dudul Dorje was ordained a novice by Situ Rinpoche in Tsurphu. The Karmapa received full teachings from Situ Chokyi Jungnay and the sixth Kyabgon Drukchen, Kagyu Trinlay Shingta.

He also received Nyingma teachings from Rigdzin Tsewang Norbu. Karmapa Dudul Dorje is said to have blended together the two lifestyles of scholar and “crazy-wisdom” yogin, and that he embodied the compassionate spontaneity of awakened energy. His love for animals became legendary. Each day he was said to have spent a lot of time with the creatures who flocked to him, as well as with his human students. In Lhasa he averted the flooding of the Tsangpo river by invoking the blessing of Avalokiteshvara and Buddha Shakyamuni.

The seventh Gyaltsab Rinpoche (1699-1765), however, had already installed a son of the wealthy Ger Namsayling family as the reincarnation, with the approval of Shamarpa’s monks at Yangpachen monastery, his principal seat in Tibet. The dispute eventually reached the courts, where it was decided that the Karmapa had indeed located the true incarnation, Shamarpa Mipam Chodrub Gyamtso, who became the principal disciple of both Karmapa Dudul Dorje and Situ Chokyi Jungnay, and the next lineage holder.