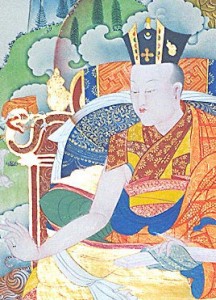 The 12th Karmapa, Changchub Dorje (1703-1732), was born at Kyile Tsaktor in Derge province in east Tibet. It is said that when he was just two months old, Changchub Dorje declared that he was the Karmapa.

Shamarpa heard about this remarkable child and sent a party to investigate and test the boy. He gave him the name Changchub Dorje. During his early years he was instructed by several noted meditation masters and scholars, including Situ Chokyi Jungnay, Tsuglak Tenpai Nyingje and Nyenpa Tulku.

At the age of seven, he arrived at Karma Gon, one of Karmapa’s principal monasteries. Then he journeyed to Tsurphu. In Tsurphu he was visited by Katok Tsewang Norbu, the famed Nyingma meditation master, who instructed him in some Nyingma doctrine. Changchub Dorje in turn gave him teachings on the six yogas of Naropa.

The Karmapa set out on a pilgrimage to Nepal, Sikkim, Bhutan and India accompanied by Shamar Rinpoche, Situ Rinpoche and Gyaltsab Rinpoche. During his return to Tsurphu, while the party was visiting Mount Kailash, he received an invitation to China. Back in Tsurphu, Karmapa Changchub Dorje went into retreat, then visited Lhasa, and traveled to southern Tibet, giving teachings to many people.