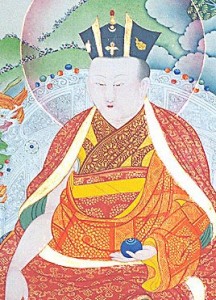 The 11th Karmapa, Yeshe Dorje (1676-1702), was born at Maysho in east Tibet. It is said that as a young child he had many visionary experiences that he told to his relatives. After being identified by Shamar Yeshe Nyingpo, he was taken to Shamar Rinpoche’s monastery Yangchen in central Tibet, before being enthroned at the monastery of Tsurphu, one of the Karmapa’s three principal seats in Tibet.

Not only did Shamarpa give him the Kagyu teachings, but Mingyur Dorje and Taksham Nuden Dorje also gave him Tercho teachings, which originated with Padmasambhava, the Indian master who brought Buddhism to Tibet – thereby fulfilling a prophecy of Padmasambhava’s, recorded in the scriptures, to the effect that the 11th Karmapa would hold certain Tercho lineages.

It is said that the 11th Karmapa’s consummate spirituality communicated itself both through his teaching and the miraculous quality of his activity. On one occasion he is said to have emanated several forms of himself, each of which gave instructions to the individuals present.

Karmapa Yeshe Dorje also located and identified the 8th Shamarpa, Palchen Chokyi Dondrub, who became his close student and next lineage holder. The 11th Karmapa was the shortest lived of the Karmapa incarnations. He passed away at age twenty-six.