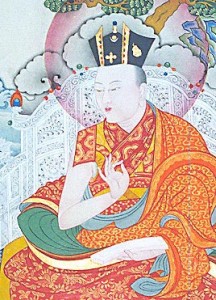 The 10th Karmapa, Choying Dorje (1604-1674), was born in Khaytri Tang in Golok province, in the far north-east of Tibet. He was identified and, at the age of eight, officially enthroned by the sixth Shamarpa, Chokyi Wangchuk, who also gave him the full Kagyu transmission.

In Tsurphu, Pawo Tsuglag Gyatsho gave him lay ordination, empowerments, textual transmissions and instructions of Karma Pakshi, Rangjung Dorje and Chodrag Gyatsho. At the age of twenty-one he was ordained a monk and entered into intensive meditation.

Later, Choying Dorje made a pilgrimage to the Nyingma monastery of Samye where Shamar Rinpoche gave him the Bodhisattva Vow. Karmapa travelled throughout Tibet, teaching and promoting the welfare of the people, until certain political difficulties arose. Ngawang Lozang Gyamtso, the fifth Dalai Lama, had become the official ruler of Tibet, a role that would continue to be filled by his successive incarnations. He established a pact with the Mongol ruler Goshir Khan; the ensuing sectarian persecution severely weakened the Kagyu doctrine in Tibet, and placed the Karmapa in such a difficult position that he was forced to leave the country.

On his journey through Nepal and Burma to Yunnan in China, Choying Dorje founded monasteries along his route. Twenty years were to pass before he could return to his homeland. He identified the seventh Shamarpa, Yeshe Nyingpo, and with the transmission of the Kagyu teachings, selected him as lineage holder.