Karmapa to lead prayers and give empowerment

The Monlam is being organised by Karmapa’s charitable trust, the South Asia Buddhist Association (SABA). One of SABA’s main goals is to support the monastic Sangha and to establish recognised educational models that integrate Buddhist principles and tradition.

At Bodh Gaya, under the Bodhi Tree, descendent of the very tree under which the historical Buddha attained enlightenment, Karmapa will lead prayers, accompanied by lamas, monks, nuns and lay students from India and around the world.

Samantabhadra’s King of Aspiration Prayers will be at the centre of these recitations. This traditional wishing prayer consists of vast altruistic aspirations to attain enlightenment in order to lead all beings to enlightenment. As Karmapa has said:

Aspirations are extremely powerful. They are one of the most moving phenomena, which touch us deeply. They go very much to the depth of our consciousness.

Karmapa will grant an empowerment, and conduct a puja for the deceased. Jamgon Kongtrul Rinpoche will also give teachings.

See the page about the Kagyu Monlam for more information on the significance of the Monlam, and the kagyumonlamchenmo.org website for the schedule of the 2016 Kagyu Monlam. 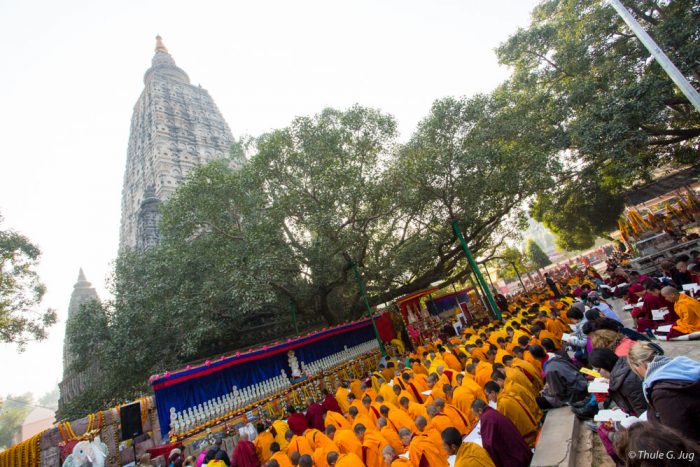 The Kagyu Monlam 2015, led by Thaye Dorje, His Holiness the 17th Gyalwa Karmapa.